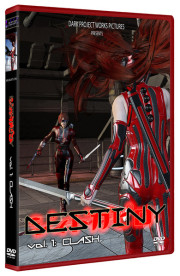 I took the 30-page online comic I made the previous year, and wrapped up the final scenes of the comic for a short titled, DESTINY: Vol.1 -Clash. Voices and audio completed. 3 songs not created by Dark Project Works have been used in this non-profit movie. They are by Local H, H-Blockx, and Linkin Park.

DESTINY vol.1: CLASH, has come to DVD! It is free to all, but supplies are limited, so contact me now for your free DVD.

Over 1 minute pre-rendered on the AGENT follow-up, NEW DAWN. Unfortunately, this won't end up in the forthcoming movie, as I've now upgraded her base figure.

Had been awaiting completion of Zign Track for Poser, by Zign Creations. But I may not go down this road yet, as I feel I can lip-sync it all myself through Poser quite well anyways. New technology, so I felt like I had to have it. It's worth checking out if you are someone looking to lip-sync your Poser and/or Animation Master characters, though I feel Animation Master benefits a lot more from this app.

I've also been thinking of an in-between project, merging live-action with CG. Whenever I start a new project, I try to give each a different style, to set it apart from the last.

DESTINY has done pretty well for itself since I released the vol.1 DVD. I've hinted for some time now at a vol.2, but decided to scrap it in favor of a straight to DVD feature film. I'll be going for an anime style, as I feel it would best suit a project like DESTINY.

I was going to put all my time into NEW DAWN. But been so busy, that all I've done is the face texture for Conrad Dorton. Things will pick up again in the future, right when you least expect it.

Its been a pretty unproductive year. It can't be helped I guess. In 2009 things should start to pick up again.﻿