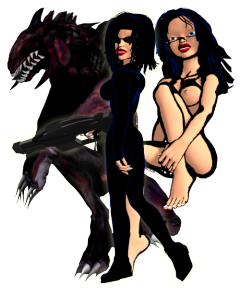 Released in April 2005.  Been shown on 3BTV.com since that date, and has been used in their showreel for a convention held later that year.

To mark the 10 Year Anniversary of Agent, I've put together this Special Edition.

Here are some screenshots from the original release.

Below are some images made for her second incarnation. Unfortunately, a short was never finalized, but I have put together some of what I did create at the time. This was the beginnings of a fresh new vibrant looking Agent animation.﻿

Reworking the base character led to the beginnings of an Agent remake.

Based on my original 2005 animated short, AGENT: The Introduction. NEW DAWN follows Agent Lotia, as she battles the global genetics conglomerate, GeneCor.

NEW DAWN remakes and completely updates the original animated short with an actual story, giving the project a true sense of being.

In the run-up to New Dawn, Conrad Dorton is searching for his missing partner, who's last mission led her into the depths of GeneCor, where she was never heard from again.

5 years on, Conrad still searches. In that time, additional GeneCor experiments have been released on the city by the maniacal Docter Ivan Stoughton, who himself has fallen head first into the genetic gene pool, twisting his very mind and soul.

This image features an enhanced style of Destiny: The Movie, giving darker, grittier shaders, which reflect the more adult nature of the upcoming movie. The image displays Conrad in his new battle armour (complete with reflections), and the Nikrea, a genetically engineered "clone" of Agent Lotia, who has the ability to shape shift to capture her prey.

Our hero's must work fast to track her down, as people are dying all around the city, and her spawn is waiting to hatch.﻿

Playing around with styles, I came up with the following artistic video.

At the time, I was working on a planned Destiny movie.  New Dawn was to be my second feature length movie.