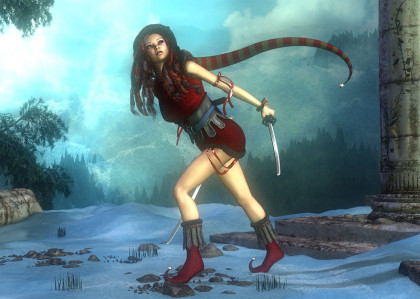 Before her stands an old woman, trembling in the cold.

"Are you alright?" Mitsuko asks her.

The old woman slowly raises her head, ice cracks around her lips as she begins to speak. "My dear, how nice of you to ask. But I fear it is already too late".

"What do you mean?", Mitsuko asks, "What's happening?"

The old woman reveals a snow globe from under her cloak. She shakes it, causing the snow to whisk around the inner structure. Mitsuko gazes upon it, feels light-headed and stumbles to the dirt.

She wakes on a snowy ground. Rising to her feet, she expects to see the old woman before her, but she is alone. This is not the same land. Not only that, but her entire outfit has changed. "What sorcery is this!" she says aloud.

The trees rustle, something approaches. She draws her blades. Whatever it is, it's big.﻿ 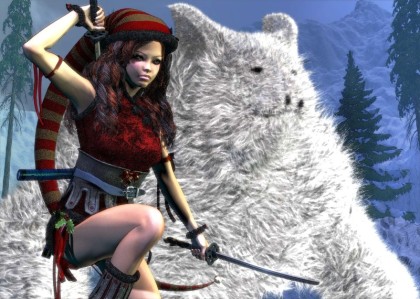 Towering before her, the beast, exhausted, trembles at the sight of her blades. Noticing this, Mitsuko lowers her weapons, trying to calm this "gentle beast". The creature's hind legs give out, tumbling it into the snow beneath it.

"What was it running from", Mitsuko thought to herself, "It must have something to do with why I've been brought here". She carefully walks up to the beast.

She doesn't know how, but somehow this creature is able to communicate with her telepathically. Her heart fills for the beast, "I will help you", she says determined.

The creature slowly rises to it's feet. "Please, follow me". It turns and heads back in the direction from where it came, with Mitsuko following behind. 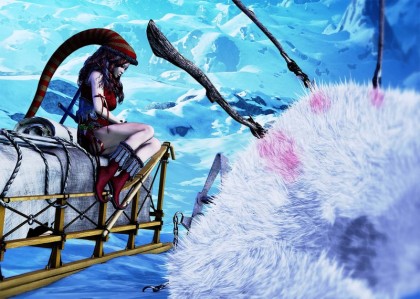 They arrive at a clearing. A sled appears to be abandoned here. "I will scout ahead", the beast telepathically tells Mitsuko as he bounds towards the sled. Mitsuko feels that something isn't quite right here.

The beast steadily looks around the sled, nothing appears out of the ordinary. Without warning, danger strikes! The beast places it's hind leg into a steel trap, it's jaws snaps shut, crushing the bone, maiming the beast. The beast roars, screaming out in pain, its cries echo the mountainous region.

Mitsuko wades through the snow towards it as it collapses in agony. As the creature struggles, a trail of snow lifts from a chain attached to the trap. Mitsuko watches in horror as spears are sprung into the air, as the second trap is put into motion.

For a brief second, time grinds to a halt. 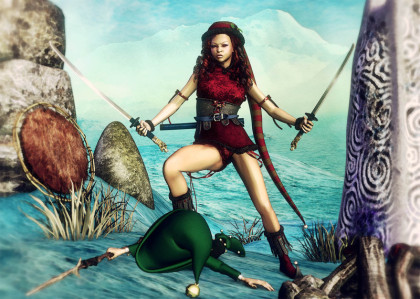 Mitsuko arrives at an encampment with surrounding structures of stone. She can see small figures carrying bladed weapons in the distance, that appear to be guarding a nearby shack. Upon entering the camp she's spotted by one of the dwellers, a short statued man with pointed ears, who immediately forms an attack stance at her with his bladed staff. Backing off, she notices the staff's design, the very same that killed the creature which led her here. Frantically, she draws her blades. The man, in fear for his life, turns to run away as Mitsuko cleanly severs his spinal column, bringing him down before her.

"Whatever it is they're guarding up there" Mitsuko thinks to herself, "it's important enough to die over. Is THIS why I'm here?!" Ready to find answers, she heads up the hill, through the camp towards the guarded building.

Nothing best stand in her way. 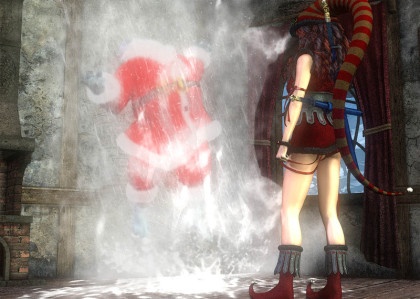 Mitsuko swings each of her blades, creating trails of blood spots either side of her across the snowy ground. She gazes at the building before her and wonders the importance of this guarded place, then enters.

Inside it is freezing, much colder then the outside. Encased in ice, in the opposite corner of the room, is a white bearded man dressed in red and white clothing. Mitsuko places her right hand upon the ice. "Who are you?" she asks. The floorboards to her left creak, she turns in their direction, and there stands the old woman from before.

"You made it here safely I see" the old woman smiles. "I am sorry for taking you without explaining the situation, time operates very differently here. It's time I explain." They each sit on two nearby chairs. "When the vale between your world and the underworld collapsed, it too had a negative effect on our world. Corruption spread throughout the land. Here in a prison of ice, is our worlds last hope for spreading joy and happiness. Please, only you can set him free, Mitsuko, child of the light. 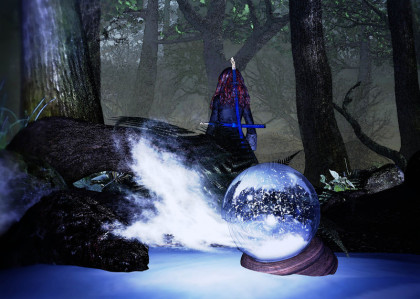 The ice splinters around Mitsuko's blade, forming hairline cracks throughout the entire icy prison. Mitsuko focuses her energy, and with no more then a gentle twist, the block ruptures. Ice comes crumbling in front of her, releasing the bearded man. Stepping back from him, avoiding the falling ice, she loses focus as her vision blurs, a side effect of her power. Without even knowing it, she crashes to the ground.

Waking now in a familiar place, the forest where she met the old woman, she stands bewildered. "Did all that really happen?" she asks herself. 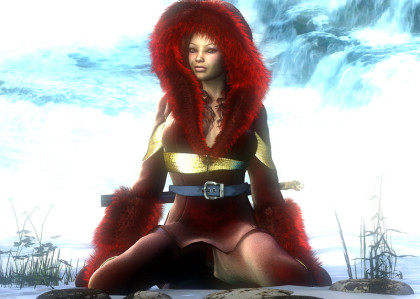