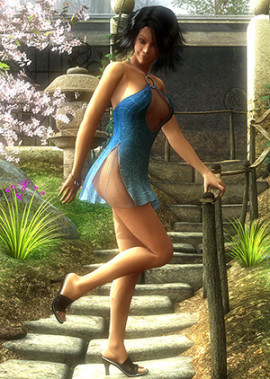 There's been a new addition to the Dark Project Works "family", in the form of Avangeline. She'll be cropping up throughout the year as the new supermodel, filling the void left by Cuddles' departure. Here she is below, expect to see more of her in the near future.﻿

Keep Back The Night is also progressing well. With lack of time to write, I'm only able to do it on my work lunch breaks, which only gives me the best part of an hour 4 days a week. But I am writing it, that's the main thing, and it's looking to be quite a beefy story. So I should easily be able to create a novel worthy of being published!

May 2011: Desert Earth has arrived with episode six, bringing the entire series full circle! I will soon be starting episode seven, which I just know will be a big pain in the ass. But hey, the series is almost complete.

I made an announcement last month about my project plans for next year. As I love anime, and Japanese character design, I have decided to created my own anime inspired series or movie. I've still to work on the story to decided whether I'm capable of doing a fully hand drawn movie at this stage, but I do have a lot of story already planned out in my mind. Basically, the story revolved around factual events that have happened in my life. The project is called The Mistake of Being Me.

July 2011: Desert Earth has arrived with episode seven. Only one episode to go! I'm also working on the DVD project. Only 250 DVD's will be made, so get your orders in while you can. Over 60 have already been allocated!

August 2011: I decided to release the final episode over a month early. As DVD production is in full swing, I figured it only best. Talking of the DVD, it'll be ready to ship by mid October 2011!