Things haven't been going well.  I don't seem to be making any impact with my work.  So, this could be the final year of Dark Project Works Pictures. 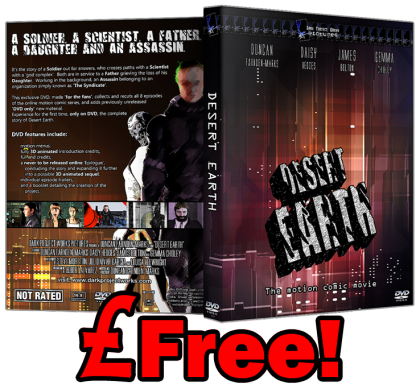 April 2013: I've completed the intro credits scene for The Agent!  The project will continue early 2014, whilst I work on my side project and testbed, Human: Playing God.

July 2013: Things are all go on Human: Playing God, the prequel story to Desert Earth.  Hopefully the short will be out for Xmas this year.  There has been a lot of technical issues, program limitations, and the motion capture simply not working as expected.  But still, it'll get there eventually.  And unlike Desert Earth, the full short is fully 3D animated!  It also has a full voice cast, and James Bolton will reprise his role as the Scientist from the original story!!

August 2013: It doesn't look like Dark Project Works Pictures is shutting its doors after all!  Recently my industry contacts have grown slightly, and the Human project is coming along very well.  With the project coming to a close towards the end of the year, I look forward to working on The Agent, a re-imagining of Agent: The Introduction which I released in April 2005.

Below is a sneak peak of the animation you'll expect to see in Human: Playing God.

October 2013: Human: Playing God is still in production, and is looking to be released Feb 2014, but the main story will be wrapped up by years end.  Additional scenes from The Agent universe will fill in gaps between scenes and make the project not only whole, but more like the 'living comic' it's meant to reflect.

Keep Back The Night has been completely typed up from my hand written story, and the project may ship out as 3 online books, with the final book still to be written.  The whole piece needs reformatting and a plan put into place for the books images.  So far so good.